The Cold Steel Spike is something that’s been in my peripheral vision for years. I can’t seem to find any record of when it was first introduced, but I recall it being advertised at least 15, if not 20, years ago. At the time it caught my eye due to it’s slim and succinct lines. It was sold with a sheath that could be strapped to your forearm and was clearly designed as a concealed hold out weapon. 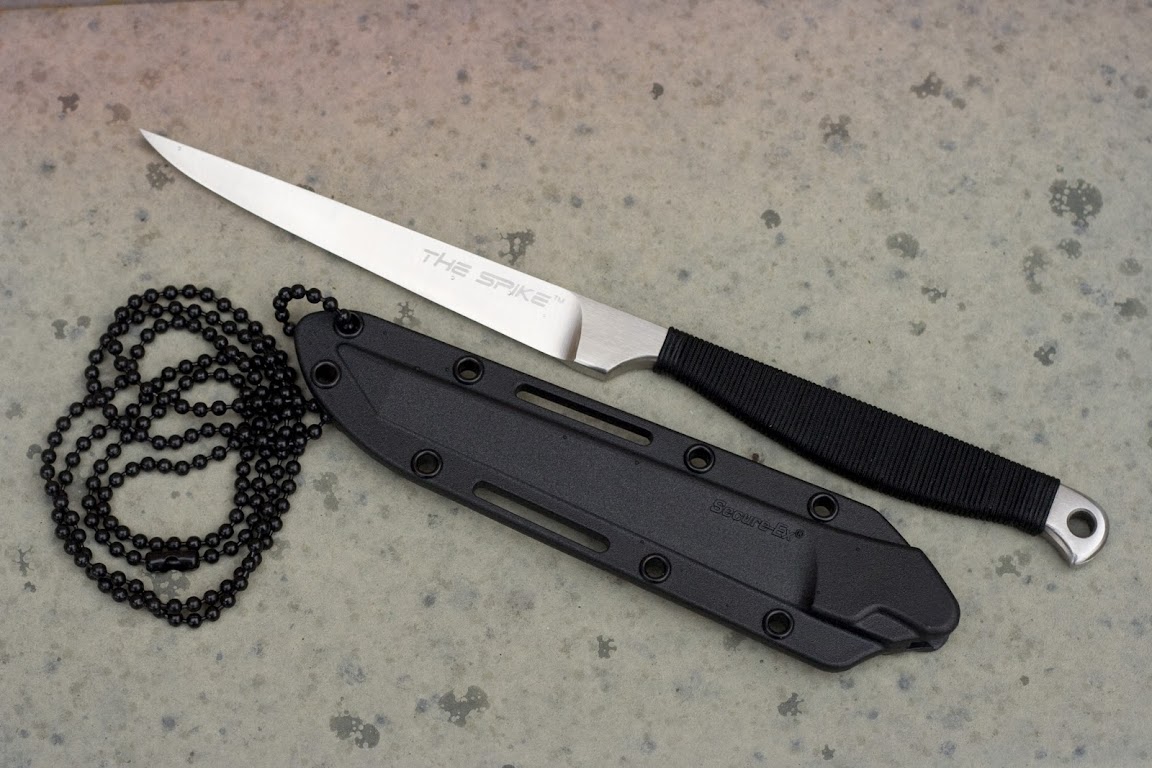 Designed by Barry Dawson, The Spike is elegantly simple and purpose built to be deadly. Over the years, Cold Steel has occasionally updated the design, offering different blade and handle shapes, some less ridiculous than others, but in my estimation the original design remains the best. These days it ships with a molded Kydex sheath and a neck chain to jump on the neck knife bandwagon. I can’t find anyone that still sells the original leather arm sheath, and it’s entirely possible that it was a figment of my imagination.

Made of a single piece of Cold Steel’s 420 Sub Zero Quench steel that is 7/32″ thick at the guard, and tapers to the thin point of the blade. The handle is cord wrapped and just slightly wider than the thickness of the blade, with a gentle curve to accommodate grip. The blade features a Scandinavian grind with a zero edge, meaning it comes out of the box wicked sharp. 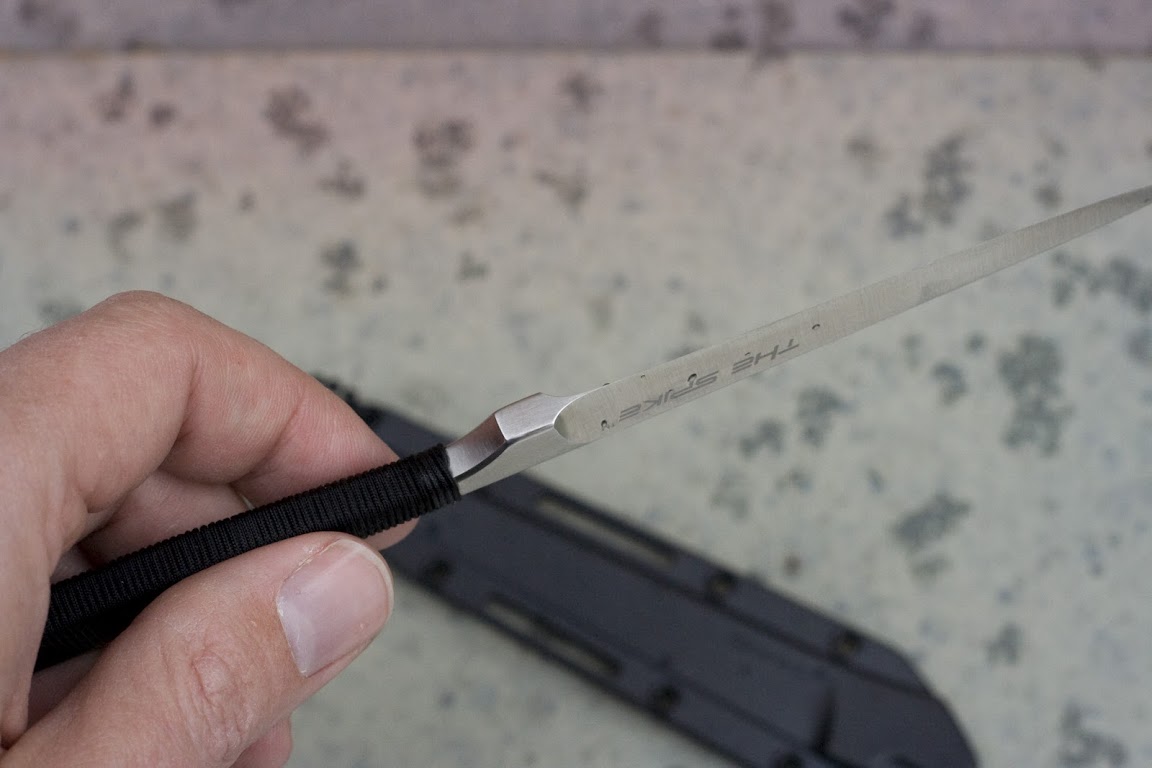 The Spike sits in the hand easily, if a touch small. I wouldn’t call it a confident grip. If your hands are large, you may find it difficult to get a solute grip on the narrow handle, and I’m concerned that any aggressive slashing may cause the narrow grip to twist in the hand and turn the blade.

The zero edge grind presents some issues. It’s marvelously sharp, since there’s no secondary bevel, the only way to sharpen it is to lay the face of the blade against the stone. If you’re the kind of person that gets OCD shivers about scratching the blade, this is going to be a problem for you. Significant dulling, chips or dents will take a very long time to work out. On the other hand, normal touch ups won’t be difficult, but will mar the blade. 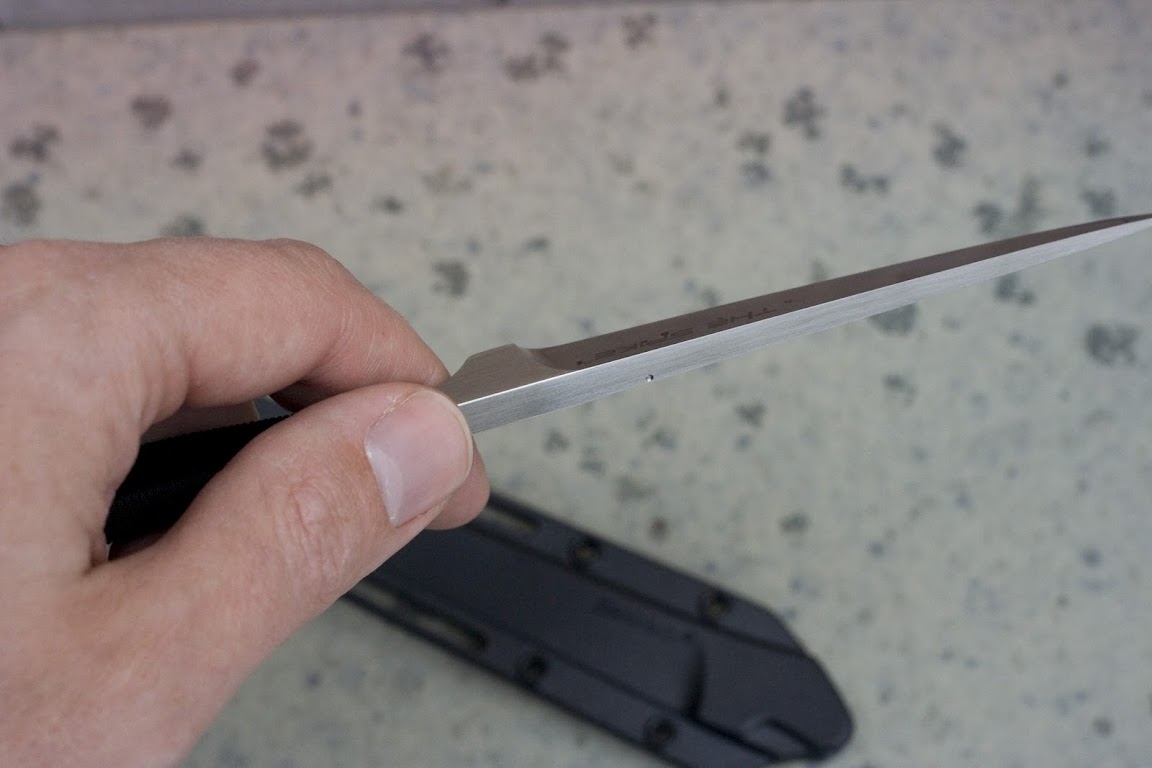 The thickness of the blade makes it sturdy for such a small fixed blade knife, and while it whips through soft and thin material, it can be tough to work through harder and thicker materials.

The sheath is adequate to the task of stowing the blade while not requiring a visit to the ER. It appears like it could easily be lashed to a belt by way of the small holes, but I’m not sure how valuable such a configuration would be. It’s too long to lay horizontally across the back without showing. It comes with a neck chain, but I think it’s too heavy and large to effectively and comfortably be used as a neck knife.

Here’s the thing though. This isn’t working knife. It may be your EDC, but it’s not the kind of knife you’ll want to whip out to open the mail, cut zip ties, or strip insulation from cable. This knife is purpose built with one goal in mind. 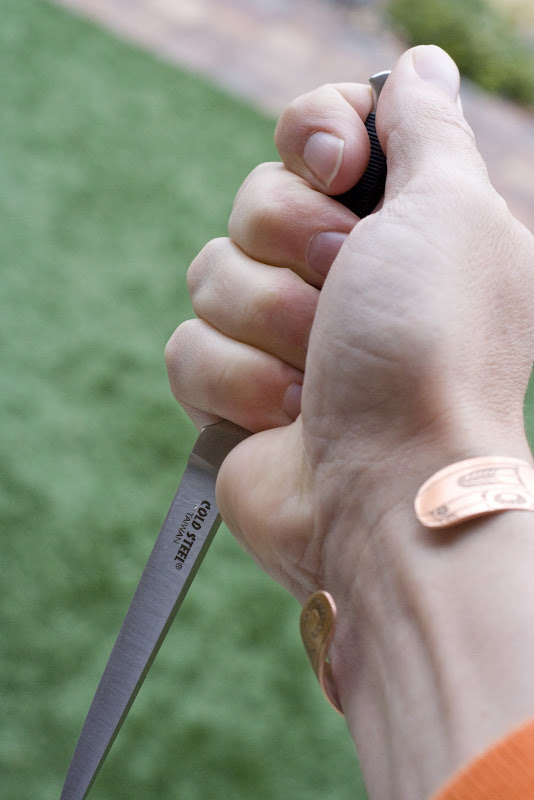 The super sharp but strong edge, the thick but shallow blade, the strong but thinly tapered point. This knife is nothing more than a fancy steel shiv. it’s designed to slip easily and deeply between the ribs and to slash smoothly through flesh. The Spike is the knife you hide in your boot when you’re sure you’ll be raped in the park. If this is your EDC knife, then you’re either in a very desperate situation, or a mall ninja of the highest order. Two situations which may be more similar than we’d like to think.

This entry was posted in Fixed Blades, Knives and tagged Cold Steel. Bookmark the permalink.